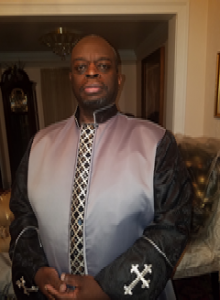 Reverend Bernard DeMorris Glee is the Senior Pastor of the Mt. Zion Baptist Church of Westwood, NJ.  Reverend Glee is the youngest of nine children born to Howard and Catherine Glee.  Born and reared in Newark, NJ, Reverend Glee is the product of the Newark, N.J. public school system.  Graduating high school in 1986 Reverend Glee matriculated to multiple colleges.  Finally, being led to the Certificate Program for New York Theological Seminary in 2011, Reverend Glee has received the following:

Reverend Glee accepted Jesus Christ upon joining the Bethlehem Baptist Church in December 1975 under the Pastorate of the late Reverend Steve C. Henderson, Jr.  Reverend Glee was a member of Bethlehem Baptist Church for over 40 years.  He was ordained as a Deacon in December 2000 and licensed to preach in September 2013 under the Pastorate of the late Reverend Toney E. Jackson, Sr.  While at Bethlehem Reverend Glee served faithfully in multiple ministries and capacities: choir director, choir president, Usher president, Willing Worker, Youth Leader, Men’s ministry leader, Sunday School Teacher, Assistant Sunday School Superintendent.  Wherever he was needed Reverend Glee worked.  Reverend Glee has served in the local association of the Shiloh Baptist Association of New Jersey as Laymen’s President, 1st Vice President and other roles within the Association.  He has also served on the Layman Planning Committee for the General Baptist Convention of NJ.

Reverend Glee served as a mentor in the One to One Mentoring Program; served with the Big Brothers/Sisters of Essex County and as a member of the local branch of the NAACP.  Reverend Glee strives to be an example for others to follow in the Kingdom of the Lord.  Reverend Glee’s favorite scripture verse is Acts 5:29: “Peter and other apostles replied: ” We must obey God rather than human beings.”

Reverend Glee married the love of his life, Minister Karen Glee, on January 1, 2005 and they are currently residents of Irvington, NJ.  They have worked with married, engaged and seriously dating couples under their ministry – The Two Shall Become 1 Couples Enrichment Ministry.  They are now poised and excited about this new ministry God has assigned to them.

The Glee’s are excited to join in matrimony with the Mt. Zion Baptist Church family and is looking forward to what God is going to do with this union.